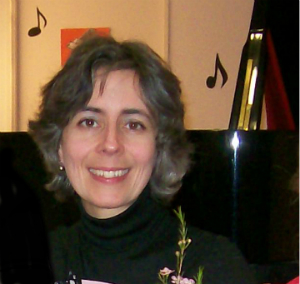 “In a world of loud messages and hype, Ms. Bardin showed the power of a whisper.” – Rorianne Schrade, New York Concert Review

A recital program of unusual subtlety, played with exceptional nuance and sensitivity, was presented this week by French pianist Delphine Bardin under the auspices of the Pro Musicis organization. She assembled a program of some of the more intimate works of Mozart, Schumann, and Debussy, and she did so with a special, understated artistry. To sum things up, in a world of loud messages and hype, Ms. Bardin showed the power of a whisper.

Walking onstage with undemonstrative, dignified demeanor, Ms. Bardin is the antithesis of classical music “stars” today, many of whom value flash and ratings. She is all about the music, and whether or not that quality gains ultimate recognition will reflect more on the world than on her gifts as an artist.

Opening her program with Mozart’s oft-overlooked Sonata in B-flat major, K. 281, she played with consummate control, pure, crystalline sound, and lucid conception. While experts in studies of historical performance practice would undoubtedly approve of her every note, her playing never devolved into the porcelain-doll preciosity that besets that specialization. Though dwelling within polite Classical boundaries, her Mozart was vibrant and feelingful, as far as one can go in that direction without anachronism or overromanticizing. She inhabited each note with sincerity. Though she never overtly flaunted her technique, her degree of technical control – including impossibly pianissimo trilling – was stunning.

Glancing at the program’s biographical notes, one was reminded that Ms. Bardin was the winner of the Clara Haskil Prize (1997, Vevey, Switzerland), an easily imaginable win, in view of the musical similarities between Ms. Bardin and the late great Haskil (1895-1960). The Clara Haskil International Piano Competition, which selected such winners as Christoph Eschenbach and Richard Goode (and past finalists including Mitsuko Uchida and Jeffrey Kahane), fittingly helped launch Ms. Bardin’s career and led to a performance on Carnegie Hall’s “Distinctive Debut Series” in 2001. This week’s concert marked Ms. Bardin’s first solo performance at this Carnegie since 2001, but she was not idle in the interim! She has concertized, won the 2009 Pro Musicis International Award (resulting in this week’s performance, among others), and received the coveted “Diapason d’Or” award (2010) for her recording of the thirteen Barcarolles by Gabriel Fauré.

After Mozart, Ms. Bardin moved to Schumann – not the Sonata No. 2 in G minor, Op. 22, as announced on the Carnegie Hall website and elsewhere, but the much-loved Kinderszenen, Op. 15. This set of thirteen miniatures suited the pianist well, each heard afresh thanks to the same understated approach that characterized her Mozart. The first piece, Von fremden Ländern und Menschen (Of Foreign Lands and People), might have seemed too straight-forward at first, causing an impatient reviewer to criticize prematurely, but with the repeat of each of its halves, there was ever-deeper expressivity, and all made sense in retrospect. Ms. Bardin knows how to defer gratification in favor of delayed deliciousness, a quality which brought to mind the elegance of, say, Alicia de Larrocha and other similarly refined performers. Further deferred rewards were found in Bittendes Kind (Pleading Child), Traumerei (Dreaming), and the meltingly beautiful Kind im Einschlummern (Child Falling Asleep).

Inner voices were beautifully highlighted in Fast zu Ernst (Almost Too Serious), although, as a minor reservation, this listener wanted a bit more projection of the top lines, as one also wanted in Glückes genug (Happy Enough) and Fürchtenmachen (Frightening). Some fuller moments (forte or fortissimo) were also tempered, for example in Ritter vom Stechkenpferd (Knight of the Hobbyhorse) and Wichtige Begebenheit (Important Event), though the spirit was vigorous nonetheless.

Dynamics are by nature a relative matter, and so a truly skillful pianist can create excitement and musical shape without high decibel levels. Ms. Bardin did just that. Highlights were Kuriose Geschichte (A Curious Story), filled with vivid character, and Häsche-Mann (Blind Man’s Bluff), equally vibrant, with its sharp accents and rapid, electrically-charged staccato notes reminding one of the great Martha Argerich.

Following Kinderszenen came the most unusual selection, the five posthumous variations on the theme of Schumann’s Symphonic Etudes, Op. 13. Countless times one has heard these five variations interspersed among the other twelve core Etudes of Schumann’s great set, and countless times this reviewer has heard (and performed) the Op. 13 without the additional five; what was a completely new experience for this musician, though, was to hear the five played alone without the larger set, simply the Five Posthumous Variations from Symphonic Etudes, Op. 13. At first it seemed as strange and disembodied – like reciting a play’s epilogue without the play; in the hands of Ms. Bardin, however, it was ultimately persuasive. The five variations are certainly jewels, standing on their own merits (as long as the main theme is included, as it was by Ms. Bardin), so perhaps their separate performance will settle into common practice eventually – though this musician, at the risk of seeming a curmudgeon, hopes not. In any case, they were given, as predicted, extremely sensitive renderings, with again the forte end of the spectrum subdued to leave one in a meditative state for intermission.

If one sensed already that Ms. Bardin is a unique artist, her second half of all Debussy confirmed the impression. Taking on Debussy’s Images, Book I, Ms. Bardin was superb in all three pieces. She dazzled with her abilities to paint sonic landscapes in the shimmering Reflets dans l’eau and to sustain and give direction to the slow, ponderous Hommage à Rameau. Ms. Bardin’s sad spoken reminder of Debussy’s death in 1918 (this year being the centennial) made especially poignant her voicing of Mouvement, only nominally vivacious, with its ominous references to Dies Irae in the left hand.

Debussy’s Études, Book I, closed the concert. It was a brave programming move, as these six pieces can be difficult for audiences to embrace. The titles themselves, referring to intervals and numbers of fingers, allude not to sparkling water or other colorful images that the average listener can latch onto, but to aspects of piano pedagogy – five-finger playing, thirds, fourths, octaves, etc. Though each piece can be a gem which transcends such matters, their success depends upon an unusually keen intellect, combined with technical mastery, a vivid imagination, and the ability to project the same to the audience. Ms. Bardin possesses all of these qualities. Her technique was brilliant in the most unforgiving passages and her pedaling was a marvel. One could not help thinking how great it would be to hear her perform all twelve of Debussy’s Études one day – though one would also like to hear her in the Préludes. In any case one will certainly be hearing more from this very special artist.

The fine program notes of Dr. Richard E. Rodda undoubtedly helped the audience along, but whether because of these or because of the performances – or both – the listeners were exceptionally attentive. They seemed spellbound and gave the pianist a rousing ovation at the end of this remarkable evening.