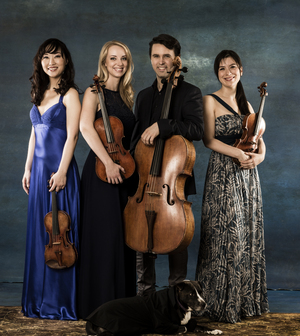 September 29, 2018
“Sensitive and finely articulated throughout … bright and vivid.” –  The New York Times

The infant Solera Quartet got its name from a Spanish winemaking process that involves blending different vintages to produce something fresh. To most, the metaphor should be obvious: This is a group that sees in musical mixology an opportunity for both new insight and full-bodied provocation. With the release of their debut album, “Every Moment Present,” on Tuesday, the foursome brings this mission to the theme of artistic obsession, shrewdly connecting three works that might otherwise appear to share little in common.

Janacek’s second string quartet, “Intimate Letters,” is a peek at the composer’s real-life infatuation with a much younger woman, and features movements that oscillate between desperate hysteria and the delicate sounds of pleading. Serving up a different picture of longing, Mendelssohn’s sixth string quartet in F minor, “Requiem for Fanny,” was penned in response to the death of the composer’s sister. While the juxtaposition may feel a bit esoteric at times, the results are often intoxicating. Opening the album is a terrific new take on Caroline Shaw’s “Entr’acte,” which offers a mini object lesson on the consuming power of influence. Directly inspired by Haydn’s late Quartet in F (Op. 77, No. 2), Shaw’s composition takes its predecessor’s experiments with shifting form and pushes those forms even further — often to obsessive extremes. The quartet’s playing on the recording is sensitive and finely articulated throughout and the sound bright and vivid. Those interested in hearing them live are in luck, however: Solera is slated to present “Entr’acte” at the group’s Carnegie Hall debut on Oct. 23. JOEL ROZEN