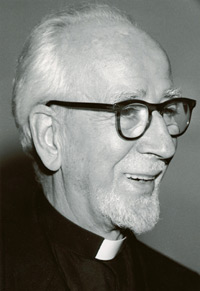 Father Eugène Merlet (1925-2013), founder of Pro Musicis, pioneered outreach by presenting Pro Musicis artists in two community service concerts together with each public performance in a concert hall. For him every concert was equally important and had to reach the same high standards. Over more than five decades, some 100 Pro Musicis artists have performed nearly 1,000 public concerts and 2,000 community service concerts.

Having survived tuberculosis as a teenager Father Merlet knew suffering and isolation. For two years he immersed himself in the works of Bach and Francis of Assisi to survive. Years later, following the centuries old Franciscan musical tradition, he completed his organ studies at the Conservatoire National de Musique in Paris and undertook the task of using his experience as a musician to discern the challenges of young musicians and find a tangible answer to their needs.

His genius was to link the needs of his fellow musicians with those of the poor, the elderly, the ill, the handicapped, the homeless, and the incarcerated. Believing that artists have an important mission in society, he asked: “How can young, talented musicians build a career while sharing their gifts with those who long for beauty?” His visionary answer: Pro Musicis.

In 1965 in Paris with the support of Henri Barraud, Darius Milhaud and Nadia Boulanger, Pro Musicis selected violinist Patrice Fontanarosa and pianist Dominique Merlet (no relation to Father Merlet) as the first Pro Musicis artists. From the outset they were presented in both concert halls and “partage” (French for “sharing”) venues. Thus Father Merlet became a pioneer and a life long advocate for outreach that today has become widely emulated.

But the concept of concert artists performing outside of concert halls was a tough sell in the 1970’s when Father Merlet introduced “partage” (community service) in the USA. It did however earn the early support of presidents of major conservatories—Gunther Schuller, Rudolf Serkin, Peter Mennin. Then William H. vanden Heuvel, Chairman of the New York City Board of Corrections, paved the way for the first US community service concert in The Tombs, a notorious Manhattan detention center, on October 14, 1971. Today many musicians, arts organizations, and music schools place their social conscience at the center of their activities.

In 2015 the Board created The Father Eugène Merlet Award for Community Service in memory of Father Merlet. This annual award celebrates and advances the creativity of individuals whose community service initiatives awaken the human spirit through the transformative power of music.

Each year the plan is to select three recipients, with preference for Pro Musicis artists, to receive a $4,000 grant in support of their project. To view the recipients of this award, go to Awards.

“Not many of the Rikers Island inmates had experience with classical music. An hour and a half later, however, the prisoners were on their feet with a standing ovation for Mr. Klibonoff.”

“Pro Musicis gave me the opportunity to experience first hand the power to heal, to bring light into dark places, and to experience the depth of my own feelings about music’s importance in the world.”

“Pro Musicis helps young artists to understand what their gift is. It seeks to foster a new generation of artists who will use their gift in a way that is inspiring and challenging.”

“Being the first Italian artist selected for the Pro Musicis International Award has been very beneficial to me, particularly in Italy. In fact, in the eyes of Italian producers, my standing is now on a higher level.”

“I didn’t know what to expect when I went to the Los Angeles prison for women. As it turned out we had a love for music in common. I wanted to please and when they saw that, they really opened up.”

“Pro Musicis helped me discover how rewarding it is to SHARE! The community service concerts had such a deep effect on me. I would not be who am today if I hadn’t had the opportunity to share with those audiences, especially at a drug rehabilitation center in Harlem and at Terminal Island Federal Prison in California.”